Another Solid Quarter For Super Funds As Economic Outlook Improves

Super funds had a solid March quarter, with the median growth fund (61 to 80% growth assets) up 2.5%. The previous two quarters were also positive, at 3.1% for the September quarter and 2.5% for the December quarter, so the cumulative return for the first nine months of the 2016/17 financial year is now a healthy 8.5%.

The March quarter return was driven mainly by strong share markets. Australian shares advanced 4.7% while international shares were up 5.4% in hedged terms but, with the appreciation of the Australian dollar (up from US$0.72 to US$0.76 over the month), the return in unhedged terms was lower at 0.9%. Listed property was down, however, with Australian and global REITs retreating 0.1% and 1.5%, respectively.

Chant West director, Warren Chant says: "Growth funds have performed better than expected this financial year. With only the June quarter remaining, there's a very good chance that they'll deliver an eighth consecutive positive financial year return. This is particularly impressive given the uncertain economic and political climate we've seen over the past few years.

"While global economic growth remains patchy, the picture is certainly better than it was 12 months ago. US economic data continues to show improvement, and the share market has responded with solid gains. Steady growth, strong job gains and confidence that inflation is moving towards its target of 2% prompted the Federal Reserve to raise the target overnight interest rate by 0.25% in March to a range of 0.75% to 1%. That was the second rate hike in three months, and suggests the Fed is confident that the economy is strong enough to cope with a slow return to more normal interest rates.

"In Europe, macroeconomic data released during the quarter was mainly positive but there remains some nervousness around political developments. While the Dutch election result helped to alleviate some fears about stability in the region, polls are still to be held in Germany, France and possibly Italy. And, just this week, British Prime Minister Theresa May’s surprise announcement of a snap election to be held in June has added to the uncertainty, with the Brexit negotiations again in focus.

"Closer to home, China's economic growth continued to show signs of stabilising. However, US President Trump's protectionist policies, if enacted, have the potential to set off a trade war that could be damaging. Back in Australia, the RBA kept interest rates on hold at 1.5%. However, while GDP growth remains stubbornly constrained a further stimulatory rate cut this year remains a possibility."

Table 1 compares the median performance for each fund category in Chant West's Multi-Manager Survey, ranging from All Growth to Conservative. Over one, three, five and seven years, all risk categories have met their typical long-term return objectives, which range from CPI + 2% for Conservative funds to CPI + 5% for All Growth. However, the GFC continues to weigh down the ten year returns. Over ten years the higher risk categories failed to achieve their objectives, but Balanced and Conservative did. Over 15 years, only the All Growth category fell short of its objective having been hardest hit during the GFC.

Source: Chant West
Notes: Performance is shown net of investment fees and tax. It is before administration fees and adviser commissions.

Chart 1 compares the performance since July 1992 – the start of compulsory superannuation – of the Growth category median with the typical return objective for that category (CPI plus 3.5% per annum after investment fees and tax over rolling five year periods). The healthy returns in recent years, combined with the GFC period having worked its way out of the calculation, have seen the five year return continue to track well above that CPI plus 3.5% target. 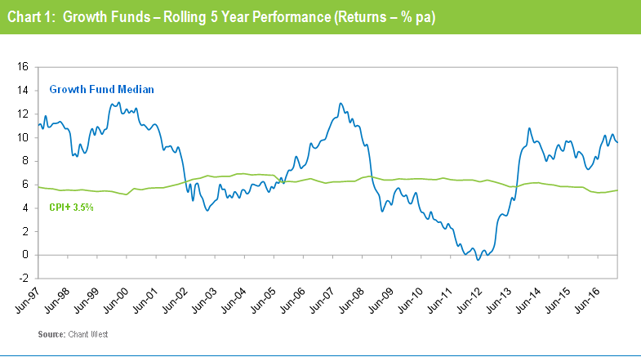 Source: Chant West
Note: The CPI figure for the March 2017 quarter is an estimate.

Chart 2 compares the performance of the lower risk Conservative category (21 to 40% growth assets) median with its typical objective of CPI plus 2% per annum over rolling three year periods. It shows that Conservative funds have also exceeded their objective in recent years.

Source: Chant West
Note: The CPI figure for the March 2017 quarter is an estimate.