Super funds suffered significant losses in August, with the median growth fund (61 to 80% growth assets) down 2.9% on the back of growing concerns over slowing economic growth in China. The poor performance in August more than outweighed the gains in July, so the overall return for the first two months of the 2015/16 financial year was negative, at -0.6%.

Listed share markets, both in Australia and overseas, became increasingly volatile in August as investors reacted to signs that the Chinese economy is slowing faster than expected.  The losses over the month were substantial, with Australian shares down 7.7% and hedged international shares down 6.6%, although the Australian dollar’s continuing decline against the US dollar (down from US$0.73 to US$0.71 over the month) saw the loss in unhedged terms reduced to 3.1%.  Listed property also had a disappointing month, with Australian and global REITs down 4.0% and 5.9%, respectively.

Chant West director, Warren Chant says: “It’s when we experience a month like August that we see the benefits of diversification in play.  Growth funds certainly feel the effects when listed markets fall sharply, but they do have substantial investments in other in sectors, including alternative and unlisted assets, that help cushion the fall.  So while Australian and hedged international shares both lost more than 6.5%, the typical growth fund member only suffered a loss of 2.9%.

“The people who are most concerned about their accounts going backwards are those approaching retirement.  In many cases, however, either as a result of their own actions or because of the way their fund is designed, by that stage they will be invested in a lower risk option.  For them, the performance of our Conservative category median will be more relevant.  This category, which has a lower allocation to listed shares, had its loss in August limited to just 1.1%.

“The trigger for the sharp sell-off in stocks worldwide was increasing concern over the slowing pace of growth in the Chinese economy.  Even in the US, where recent economic data has been positive, the market fell significantly due to the negative sentiment surrounding China.  Prior to this, many commentators had predicted that the US Federal Reserve would raise interest rates at its September meeting.  While that is still a possibility, it now seems more likely that the first rate rise will be delayed a little longer.

“The China malaise, which has led to declining energy and metal prices because of dwindling demand, has affected all major markets.  The UK and the Eurozone suffered large losses, and of course the Chinese slowdown has a major impact on Australia’s economy given our strong trade links.  In August, the S&P/ASX300 suffered its biggest single month loss since the GFC.  Meanwhile the Reserve Bank left the official interest rate at a record low of 2%, with the possibility of another rate cut by the end of the year.”

Table 1 shows the median performance for each category in Chant West’s multi-manager survey, ranging from All Growth to Conservative.

Chart 1 compares the performance since July 1992 – the start of compulsory superannuation – of the Growth category median with the typical return objective for that category (CPI plus 3.5% per annum after investment fees and tax over rolling five year periods).  The strong returns in recent years, combined with the GFC period having worked its way out of the calculation, have seen the five year return rise sharply.  For nearly two years it has been tracking well above that CPI plus 3.5% target. 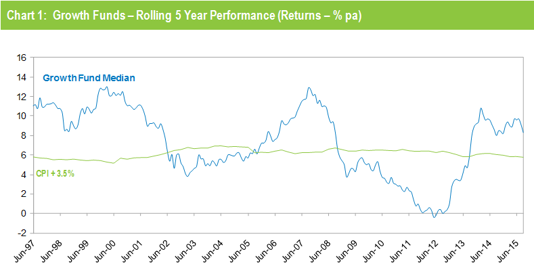 Note: The CPI figures for July and August 2015 are estimates.

Chart 2 compares the performance of the lower risk Conservative category (21 to 40% growth assets) median with its typical objective of CPI plus 2% per annum over rolling three year periods.  It shows that Conservative funds have also exceeded their objective in recent times.

Note: The CPI figures for July and August 2015 are estimates.

While both categories suffered losses, industry funds marginally outperformed retail funds in August with a return of -2.8% versus -2.9%.  Industry funds also hold the advantage over the longer term, having returned 6.8% per annum against 5.6% for retail funds over the 15 years to August 2015, as shown in Table 2. However, performance over periods of seven years and less is much closer.