Positive Return For 2020 Is Testament To The Resilience Of Super

Super funds have delivered a positive return for the 2020 calendar year, and in doing so have demonstrated remarkable resilience in the face of major market disruption. The median growth fund (61 to 80% in growth assets) ended the year up 3.7%, an amazing result given the economic damage wrought by the COVID-19 pandemic. The 3.7% return might be small compared with the bumper 14.7% result for 2019, but nevertheless it represents the ninth consecutive positive calendar year and the 11th in the past 12 years.

Chant West Senior Investment Research Manager Mano Mohankumar says “if we take ourselves back to late March, the prospect of finishing the year up 3.7% would’ve been inconceivable. Back then the world was in chaos, facing a frightening health crisis which saw most countries introduce some form of lockdown. Whole industries ground to a halt, countless jobs were lost and the global economy was heading rapidly into recession. Over February and March, major share markets took a beating and the median growth fund plummeted 12%. Markets rallied from that point, however, and growth funds rode the rally to surge 15.5% over the remaining nine months of the year.

“2020 highlighted the long-term nature of super and the importance of patience. Members who sat tight generally did OK. Sadly, there were many others who panicked when markets fell and switched their investments to cash or a more conservative option. Not only would they have crystallised their losses, but they would also have missed out on some or all of the subsequent rebound. And, of course, there were those who withdrew their money from super completely. That’s understandable to deal with temporary hardship, but they’ll now be faced with making up considerable lost ground.

“The other key message from the 2020 experience is the importance of diversification. Growth funds have their investments spread across a wide range of asset sectors, and that works to cushion the impact during periods of share market weakness, as we saw in February and March. At the same time, they still have a sizeable allocation to listed shares – about 54% on average – so they’re able to benefit when those markets perform well, as we saw from April to December.

“The better performing funds over the full year were generally those that had a higher allocation to international shares, particularly those with a ‘growth’ style bias. Holding bonds rather than cash would also have helped, as would a relatively low exposure to listed infrastructure and listed property.”

Chart 1 shows the top 10 performing growth options over the 2020 calendar year, together with the survey median. 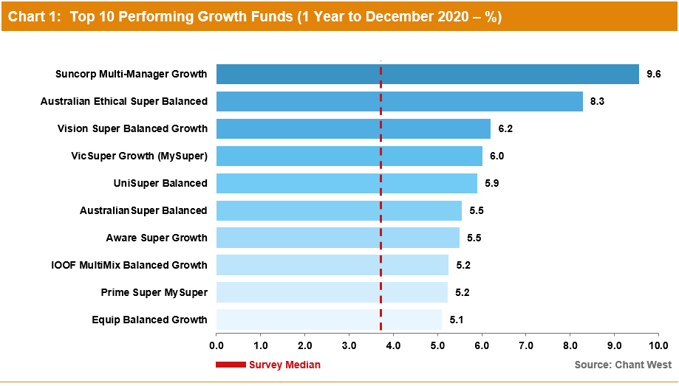 Notes:
1. For inclusion in the Top 10, an investment option that is not a fund’s main option in the Growth category must meet a minimum size requirement of $1 billion.
2. Performance is shown net of investment fees and tax. It is before administration fees.


Table 1 compares the median performance for each of the traditional diversified risk categories in Chant West’s Multi-Manager Survey, ranging from All Growth to Conservative. Over 3, 5, 7, 10 and 15 years, all risk categories have met their typical long-term return objectives, which range from CPI + 2% for Conservative funds to CPI + 4.25% for All Growth.

Chart 2 shows the top 10 performing growth options over 10 years, together with the survey median. 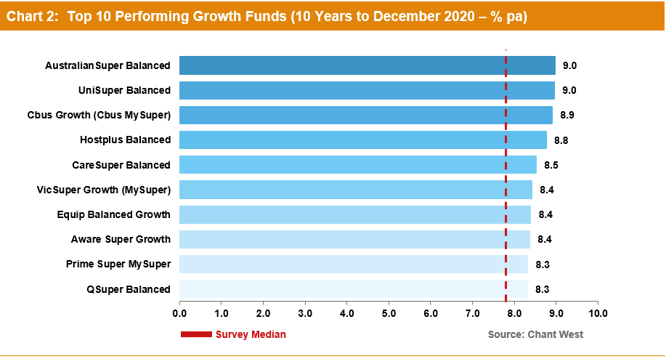 Notes:
1. For inclusion in the Top 10, an investment option that is not a fund’s main option in the Growth category must meet a minimum size requirement of $1 billion.
2. Performance is shown net of investment fees and tax. It is before administration fees.

Mohankumar says “while our Growth category is still where most people have their super invested, a meaningful number are now in so-called ‘lifecycle’ products. Most retail funds have adopted a lifecycle design for their MySuper defaults, where members are allocated to an age-based option that’s progressively de-risked as that cohort gets older.”

It’s difficult to make direct comparisons of the performance of these age-based options with the traditional options that are based on a single risk category, and for that reason we report them separately. Table 2 shows the median performance for each of the retail age cohorts, together with their current median allocation to growth assets. It also includes a row for traditional MySuper Growth options for comparison – nearly all of which are not-for-profit funds. Care should be taken when comparing the performance of the retail lifecycle cohorts with the median MySuper Growth option, however, as they’re managed differently so their level of risk varies over time.

Note:
1. Performance is shown net of investment fees and tax. It is before administration fees and adviser commissions.
2. January 2014 represents the introduction of MySuper.
Source: Chant West

As a result of the strong recovery since April, the options that have higher allocations to growth assets have now generally done better over all periods shown. Younger members of retail lifecycle products – those born in the 1970s, 1980s and 1990s – have outperformed the MySuper Growth median over the short term and have largely held their own over the medium and longer terms. However, they’ve done so by taking on more share market risk.

The older cohorts (those born in the 1950s or earlier) are relatively less exposed to growth assets so you’d expect them to underperform the MySuper Growth median over longer periods. Capital preservation is more important at those ages so, while they miss out on the full benefit in rising markets, older members in retail lifecycle options are better protected in the event of a market downturn.

While much of the focus at this time of year is on the previous calendar year performance, Mohankumar reminds fund members to think long term. “Certainly look at what your fund delivered in 2020, but it’s far more important to know what its long-term objectives are and whether it’s achieving them. Most growth funds aim to beat inflation by 3% to 4% a year. We now have data going back 28½ years to July 1992, the start of compulsory super. Over that period, the annualised return is 8.1% and the annual CPI increase is 2.4%, giving a real return of 5.7% p.a. – well above that 3% to 4% target. Even looking at the past 20 years, which now includes three major share market downturns – the ‘tech wreck’ in 2001-2003, the GFC in 2007-2009 and COVID-19 in 2020 – super funds have returned 6.7% p.a., which is still comfortably ahead of the typical return objective.”

Chart 3 shows that, for the majority of the time, the median growth fund has exceeded its return objective over rolling ten-year periods, which is a commonly-used timeframe consistent with the long-term focus of super. The exceptions are two periods between mid-2008 and late-2017, when it fell behind. This is because of the devastating impact of the 16-month GFC period (end-October 2007 to end-February 2009) during which growth funds lost about 26% on average. 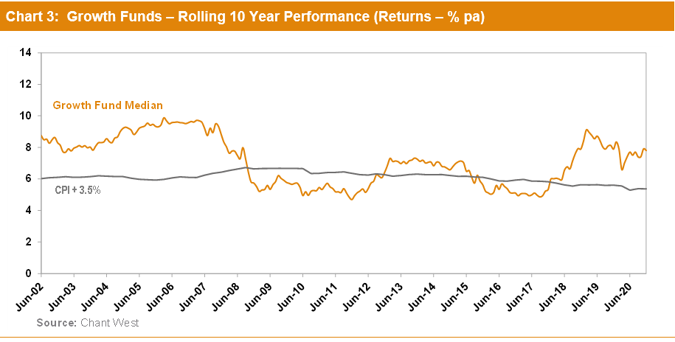 Note:  The CPI figure for the December 2020 quarter is an estimate.

Mohankumar says “returns are important but so is risk, and most funds also set themselves a risk objective. Risk is normally expressed as the likelihood of a negative annual return, and typically a growth fund would aim to post no more than one negative return in five years on average. Chart 4 plots the year-by-year performance of the median growth fund over the 28 full calendar years since the introduction of compulsory super. The objective would be no more than five negative years in that time. As it turns out there have only been four, so the risk objective has been met as well as the performance objective.

“Over the longest period we can measure, Australia’s major super funds have delivered on their promises to members, growing their wealth in real terms while protecting them from undue risk. That’s a great achievement, and it’s a message that should be conveyed as widely as possible. Super has proven to be a great way to invest, and people should be confident entrusting their savings to the major Australian funds that are among the best in the world.”

“There’s been some talk recently about super funds not delivering for members, but the long-term performance of super funds shows that this is not the case and that super funds have produced strong outcomes for members over almost all periods.” 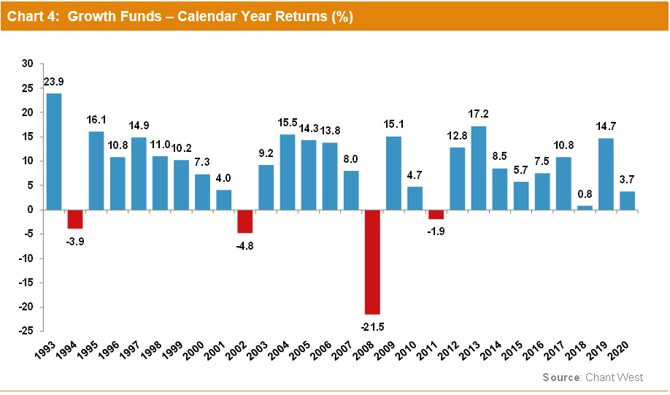 Note:  Performance is shown net of investment fees and tax. It does not include administration fees or adviser commissions.