Super funds got a lift from positive global share markets in October, and now have a good chance of finishing the calendar year in double digit territory. The median growth fund (61 to 80% in growth assets) was up 0.4% for the month, pushing the return for the first ten months of 2019 to an impressive 12.8%. Midway through November, that figure has increased further to an estimated 14.3%.

In October, international shares were up 1.9% in hedged terms. A rise in the value of the Australian dollar (up from US$0.67 to US$0.69) reduced that to 0.4% in unhedged terms. Australian shares, meanwhile, retreated 0.4%. Listed property was in the black, however, with Australian REITs up 1.4% while global REITs gained 1.8%.

Chant West senior investment research manager Mano Mohankumar says: “It has been a terrific year for super funds with a double digit return on the cards for the median growth fund. That’s the category in which most Australians have their money invested. The performance so far is significantly better than what we could have expected at the start of the year. It’s certainly a major turnaround from the December 2018 quarter when growth funds lost 4.6% and investor sentiment was decidedly negative.

“Even if super fund performance retreats in the remaining six weeks of the year, a positive return for the year would represent the 10th positive calendar year in the past eleven. That’s great news for super fund members but we caution them not to get carried away. The returns that funds have delivered since the end of the GFC really aren’t sustainable over the long term, and we expect more challenging times ahead. Given the tremendous run investment markets have had for over a decade, most asset sectors are fully valued or close to it. The global economic backdrop is still dogged by uncertainty. While there have been signs of progress in trade negotiations between the US and China, those tensions still remain unresolved and could quite easily escalate again. There is also the ongoing concern over the pace of global economic growth and, while central banks remain supportive, doubts are being raised about how effective they can be from here on as global growth inexorably slows. Finally, of course, we have the unresolved matter of Brexit and how that will play out.

“Whatever the outlook, Australians should take comfort that their superannuation is generally invested in well-diversified portfolios with investments spread across a wide range of asset sectors. The typical growth fund has more resilience built in than it did a decade ago, so it is better positioned to weather a period of investment market weakness if that eventuates.”

Table 1 compares the median performance for each of the traditional diversified risk categories in Chant West’s Multi-Manager Survey, ranging from All Growth to Conservative. All risk categories are ahead of their long-term return objectives over 1, 3, 5, 7, 10 and 15 years. Those objectives range from inflation plus 2% for the Conservative category to inflation plus 4.75% for the All Growth category.

While lifecycle is the most common MySuper default in the retail sector, most not-for-profit funds still use their traditional growth options as their default investment option. A few not-for-profit funds have gone down the lifecycle path, however, and while the general premise is the same the way it is implemented is different. Rather than allocating members to age-based cohorts as retail funds do, in the not-for-profit lifecycle model members typically ‘switch’ from one traditional risk category to another at particular ages. The diversified options that underlie these strategies are included in Table 1.

We have mostly seen strong performance from growth assets in recent years so, as we would expect, the options that have higher allocations to growth assets have generally done best. Younger members of retail lifecycle products – those born in the 1970s, 1980s and 1990s – have outperformed the MySuper Growth median over most periods shown. However, they have done so by taking on more share market risk.

MySuper products have only been operating for less than six years, so when considering performance it is important to remember that super is a much longer-term proposition. The chart below compares the performance since July 1992 – the start of compulsory superannuation – of the traditional Growth category median with the typical return objective for that category (CPI plus 3.5% per annum after investment fees and tax over rolling five-year periods). The healthy returns since the end of the GFC in early 2009 have seen the longer-term performance tracking well above that CPI plus 3.5% target for the past six years. 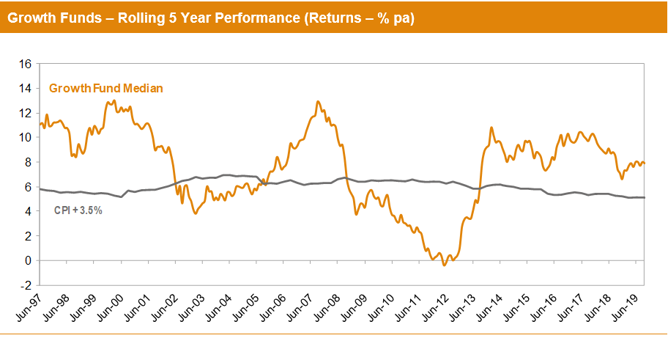 Note: The CPI figure for October 2019 is an estimate.
Source: Chant West

International share market returns in this media release are sourced from MSCI. This data is the property of MSCI. No use or distribution without written consent. Data provided “as is” without any warranties. MSCI assumes no liability for or in connection with the data. Product is not sponsored, endorsed, sold or promoted by MSCI. Please see complete MSCI disclaimer.