Super Funds Limp Towards The Line, But Still In The Black For 2015

After averaging 12.7% per annum over the past three years, super funds look set to deliver a fourth consecutive positive calendar year return – but a much smaller one this year. Following a loss of 0.3% in November, the median growth fund (61 to 80% growth assets) was up 5.7% for the first 11 months of 2015. And while the first half of December has been negative, the median return for the year still stands at an estimated 5%.

Listed share markets, which are the main drivers of growth fund performance, were mixed in November.  Australian shares were down 0.7%, and while hedged international shares were up slightly at 0.7%, the appreciation of the Australian dollar (up 1¢ to US$0.72 over the month) meant that the return in unhedged terms was actually down 2.1%.  Listed property also had a negative month, with Australian and global REITs down 2.8% and 1.2%, respectively.

Chant West director, Warren Chant says: “With only two weeks of the year left, and despite increasingly shaky investment markets, it’s still likely that the median growth fund will produce another positive calendar year return.  While it won’t reach the heights of the past three years (12.8% in 2012, 17.2% in 2013 and 8.5% in 2014), it would still represent the sixth positive return in the past seven years and the eleventh in the past thirteen.

"A more subdued return this year isn’t really a surprise.  For some time, asset managers have been commenting that we’re heading into a lower return / higher volatility environment.  They believe that many asset sectors are now close to being fully valued, and say they’re finding it harder to identify future sources of growth.

"Key themes that have affected global investment markets in 2015 include uncertainty over the timing of the US Federal Reserve’s long-awaited first interest rate hike, slowing economic growth in China, falling commodity prices and monetary easing in Europe, Japan and China in response to concerns over deflation.  Back at home in Australia, we’ve seen muted growth as the mining sector slumped further.  In an attempt to boost our sluggish economy, the Reserve Bank lowered interest rates to a record low of 2%.

"The main things to keep an eye on over the next year will be the rate at which the Fed raises rates, and whether China is able to avoid a hard landing.  Domestically, the extent to which non-mining sectors pick up will determine the degree to which the RBA might cut interest rates even further."

Table 1 shows the median performance for each category in Chant West’s multi-manager survey, ranging from All Growth to Conservative.  The three and five year returns reflect the strong performance of listed shares and property, so the more aggressive fund categories, which have a higher proportion invested in those assets, have produced the best performance.  The seven year returns have improved significantly as the GFC period has nearly worked its way out of the calculation.

Chart 1 compares the performance since July 1992 – the start of compulsory superannuation – of the Growth category median with the typical return objective for that category (CPI plus 3.5% per annum after investment fees and tax over rolling five year periods).  The healthy returns in recent years, combined with the GFC period having worked its way out of the calculation, have seen the five year return rise sharply.  For about two years it has been tracking well above that CPI plus 3.5% target. 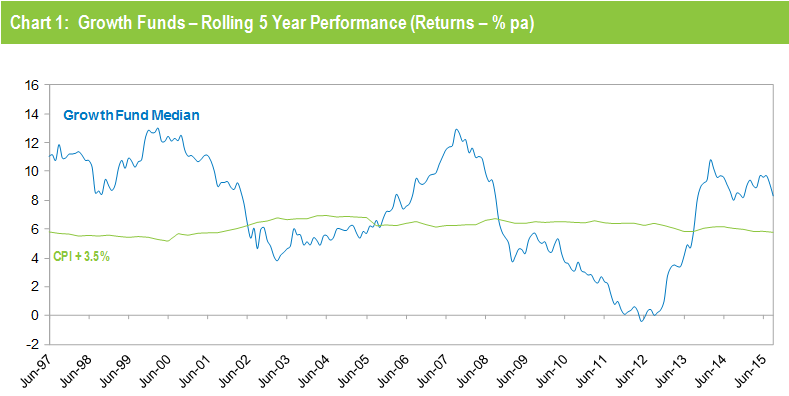 Source: Chant West
Note: The CPI figure for October and November 2015 are estimates.

Chart 2 compares the performance of the lower risk Conservative category (21 to 40% growth assets) median with its typical objective of CPI plus 2% per annum over rolling three year periods.  It shows that Conservative funds have also exceeded their objective in recent years.

Source: Chant West
Note: The CPI figure for October and November 2015 are estimates.

Industry funds ahead of retail funds in November