After a strong 2016/17 financial year, super funds were flat over the first month of the new year with the median growth fund (61 to 80% growth assets) providing a zero return in July.

Listed shares, which are the main drivers of growth fund performance, produced mixed results over the month. Australian shares were flat, with a zero return, while international shares were up 1.5% on a hedged basis. However, the appreciation of the Australian dollar (up from US$0.77 to US$0.80) turned this into a loss of 1.7% in unhedged terms. Listed property was also mixed, with Australian REITs down 0.2% and global REITs up 0.9%.

Chant West director, Warren Chant says: "The flat return in July comes as no surprise. While the economic outlook is looking much better than it did this time last year, investment markets have had a surprisingly good run and were set for a pause. We said a year ago that many asset sectors were close to being fully valued, and after a further run-up in prices it's even harder now to identify undervalued assets that will deliver solid real returns. That's going to be a serious challenge for super funds. They won't be helped by the pressure they're under to reduce investment fees, which we hope won't inhibit their appetite for seeking out new sources of active returns.

"Members need to remember that the typical long-term return objective for growth funds is to beat inflation by 3 to 4% per annum. That's a return of 5.5% to 6.5% in absolute terms, so it would be unrealistic to expect another double digit return like last year – or even to match the 9% per annum that growth funds have returned over the past eight years.

"In July, the US share market continued to make ground despite the political melodrama at home and the ratcheting up of tensions with the North Korean regime. This was because investors chose to focus instead on the improving macroeconomic data, which included on-target GDP growth of 2.6% for the June quarter.

"In Europe, too, economic data remained positive. Investors also weighed up the possibility that the European Central Bank could reduce its stimulus measures. The major European share markets just managed to nudge higher over the month.

"In the Asia Pacific, the Chinese economy continues to show signs of improvement with better than expected GDP growth for the June quarter at 6.9%. In Australia, the RBA again kept interest rates on hold at 1.5% earlier this month, citing the improvement in the global economy."

Table 1 compares the median performance for each fund category in Chant West's Multi-Manager Survey, ranging from All Growth to Conservative. Over one, three, five and seven years, all risk categories have met their typical long-term return objectives, which range from CPI + 2% for Conservative funds to CPI + 5% for All Growth. However, the GFC continues to weigh down the ten year returns with only the Conservative category meeting its objective over this period. Over 15 years, only the All Growth category fell short of its objective having been hardest hit during the GFC. 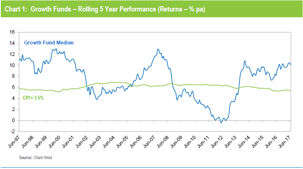 Note: The CPI figure for the June quarter is an estimate.

Chart 2 compares the performance of the lower risk Conservative category (21 to 40% growth assets median with its typical objective of CPI plus 2% per annum over rolling three year periods. It shows that, now that the GFC years have faded into history, Conservative funds have also returned to exceeding their performance objectives. 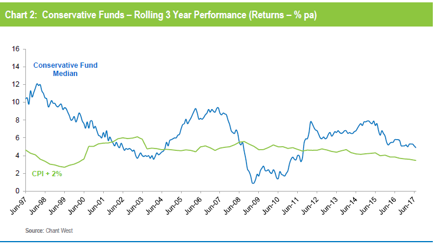 Note: The CPI figure for July 2017 is an estimate.

Industry funds and retail funds in line in July

Industry funds and retail funds performed in line with each other in July with a zero return. However, industry funds continue to hold the advantage over the medium and longer term, ahead by between 0.9% and 1.6% per annum, as shown in Table 2.