Super Funds Pull Back But Bonds Limit The Damage

After a positive start to the new financial year, super funds were down slightly in August with the median growth fund (61 to 80% in growth assets) returning -0.5%. This came on the back of a 1.4% advance in July, so the net effect is still a gain of 0.9% over the first two months of the financial year.

Share markets, which are the main contributors to growth fund performance, ended down in August after a volatile month. Australian shares retreated 2.3% while hedged international shares fell 1.9%, but the depreciation of the Australian dollar over the month (down from US$0.69 to US$0.67) turned that loss into a small gain of 0.3% in unhedged terms.

Chant West senior investment research manager Mano Mohankumar says: “Despite the volatility and the falls in major share markets in August, the median growth fund was able to limit the loss to 0.5% over the month with a handful of funds actually delivering small positive returns. This is because the typical growth fund has, on average, about 48% of its investment allocation in assets other than shares. These include unlisted property and infrastructure as well as traditional defensive sectors like bonds and cash. Bonds in particular provided strong returns in August due to falling long term bond yields, which helped offset the negative returns from shares. They’re also perceived to be safe-haven assets in times of uncertainty, so investor demands for bonds drove up their value.

“The market volatility in August was due mainly to trade tensions between the US and China flaring up again, while fears were also raised about the possibility of a recession in the US. In Europe, uncertainty surrounding Brexit remains a key concern for investment markets. Added to this, there was disappointing data out of Germany which is normally the most resilient of the European economies.

“Back in Australia, the Reserve Bank kept the official cash rate on hold at 1% earlier this month. It also stated that an extended period of low interest rates will be required to further reduce unemployment and achieve a more sustainable path towards its inflation target.”

Table 1 compares the median performance for each of the traditional diversified risk categories in Chant West’s Multi-Manager Survey, ranging from All Growth to Conservative. All risk categories are ahead of their long-term return objectives over 3, 5, 7, 10 and 15 years. Those objectives range from inflation plus 2% for the Conservative category to inflation plus 4.75% for the High Growth category.

While lifecycle is the most common MySuper default in the retail sector, most not-for-profit funds still use their traditional growth options for that default role. A few have gone down the lifecycle path, however, and while the general premise is the same the way it is implemented is different. Rather than allocating members to age-based cohorts as retail funds do, in the not-for-profit lifecycle model members typically ‘switch’ from one traditional risk category to another at particular ages. The diversified options that underlie these strategies are included in Table 1.

We have mostly seen strong performance from growth assets in recent years so, as we would expect, the options that have higher allocations to growth assets have generally done best. Younger members of retail lifecycle products – those born in the 1970s, 1980s and 1990s – have slightly outperformed the MySuper Growth median over most periods shown. However, they have done so by taking on more share market risk.

MySuper products have only been operating for just over 5 ½ years, so when considering performance it is important to remember that super is a much longer-term proposition. The Chart below compares the performance since July 1992 – the start of compulsory superannuation – of the traditional Growth category median with the typical return objective for that category (CPI plus 3.5% per annum after investment fees and tax over rolling five-year periods). The healthy returns since the end of the GFC in early 2009 have seen the longer-term performance tracking well above that CPI plus 3.5% target for the past six years. 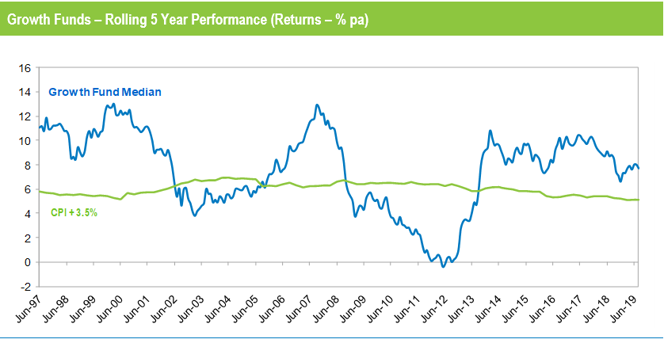 Source: Chant West
​Note: The CPI figures for July and August are estimates.