As the UK’s decision to leave the European Union reverberates through financial markets, super funds are still poised to finish in positive territory for the 2015/16 financial year. With just hours remaining, early estimates suggest that the median growth fund will post a small positive return of about 2.5%, while some of the better-performed funds may deliver up to 6%. Growth funds have 61 to 80% of their investments in growth assets, and are the ones in which the majority of Australians are invested.

Chant West director, Warren Chant says: "While all eyes will be on the financial year result it's always important to look at performance in a longer-term context, and there's no denying that super fund members have enjoyed a terrific run in recent years. The last negative financial year most people experienced was back in 2008/09 when the GFC ravaged performance. Since then, there have been six consecutive positive years, and this one looks almost certain to be the seventh. While this year's return won't come close to the previous three (15.6% in 2012/13, 12.8% in 2013/14 and 9.8% in 2014/15), it's still going to be a creditable result in the circumstances. Funds have said openly that it's hard to find reliable sources of return in this extended period of low economic growth. That difficulty has only been compounded by the current political uncertainty, with elections imminent here and in the US and, of course, the shock of the Brexit vote and the uncertainty it creates in Europe.

"We would just point to the fact that, over the seven financial years since the ending of the GFC, the median growth fund has delivered a cumulative return of about 78%, or an average of 8.6% per annum. That's over 6% above the rate of inflation over the period, so it's comfortably ahead of the typical longer-term return objective for these funds which is to beat inflation by between 3% and 4% annually.

"This year has been another great example of the benefits of diversification. Australian shares have essentially finished flat and global share markets have lost ground, but despite that the median growth fund still looks like producing a small positive result. That's because funds are so well diversified across a wide range of growth and defensive asset sectors, including alternative and unlisted assets that aren't prone to high volatility, they can successfully smooth out returns when listed markets are struggling.

"Of course, some funds will have performed better than others. We're expecting this year's top funds to report returns as high as 6%, while the bottom end of the range is likely to be just in the red at about -0.5%. Generally speaking, the better performing funds will be those that had higher allocations to unlisted assets and Australian listed property and a lower exposure to shares. Those with substantial exposure to foreign currency would also have benefited, as would those that had a higher proportion of their defensive assets in bonds rather than cash."

The table below shows the estimated median performance and ranges for each category in Chant West's multi-manager survey, ranging from All Growth to Conservative.

Chant says: "The typical growth fund has on average 56% allocated to listed shares and real estate investment trusts (REITs), so the performance of those sectors has the greatest influence on overall returns. With only one day of the financial year remaining, Australian shares are down 0.8%. International shares have fallen 3.9%, but unhedged investors have benefited from the depreciation of the Australian dollar (down over the year from US$0.77 to US$0.74), so their loss has been limited to 0.6%. Australian REITs have been easily the strongest performing sector with a return of 23.5%. Meanwhile, global REITs have returned a healthy 11.2%.

"Unlisted assets aren't valued continually, so it will be a little while before we can see exactly how well they have performed. But we expect returns for unlisted infrastructure, unlisted property and private equity to be in the double digits once June quarter revaluations are factored in.

"Growth funds do of course include some defensive assets in their investment mix. Global and Australian bonds returned 9% and 6.9%, respectively, while cash returned just 2.3%. So, as mentioned earlier, those funds that had more of their defensive investments in bonds rather than cash would also have benefited."

The chart below shows the median growth fund performance for each financial year since the start of compulsory super in July 1992. Of those 24 years, 21 were positive and 3 were negative, 2 of those being 2007/08 and 2008/09 in the depths of the GFC. 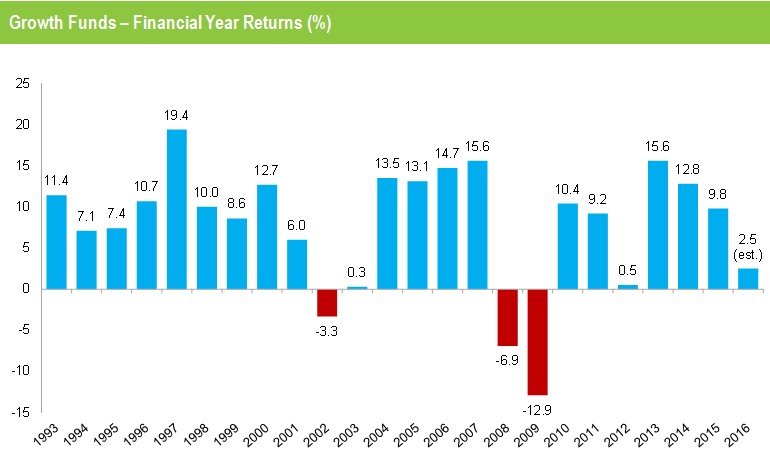 The outlook is more uncertain than ever

Chant says: "Back in July last year, after another strong year for super funds, we cautioned that investment markets were unlikely to keep performing at levels that were not justified by economic fundamentals. This proved to be true, and over the past 12 months we've seen flat or negative share market performance and increased volatility in response to the ongoing global economic and political instability.

"In the US we saw the first, and much anticipated, post-GFC interest rate hike in December 2015. The increase of 0.25% brought the Fed's effective interest rate range to 0.25% to 0.50%. For most of the year, economic data remained mixed. In May, however, the US’s better than expected GDP growth prompted Federal Reserve Chair, Janet Yellen to state that she expects a further rate hike in the coming months.

"In Europe, the most significant event was of course Britain's shock decision last week to leave the European Union. Financial markets reacted as we would expect to the heightened uncertainty, with sharp falls on most European stock markets, strong inflows into 'safe haven' bonds and a significant readjustment in currency markets. Soon after the result of the referendum was announced, the British pound tumbled 10 per cent to a 30-year low against the US dollar. While there has been a tentative recovery from the immediate sell-off, markets are still in a state of uncertainty and it will take many months to gain a true understanding of the ramifications of the decision.

"Closer to home, while there is ongoing concern about the lacklustre Chinese economy, we have started to see some better economic data over the past couple of months. There's still debate, however, about whether this signals that the downward trend in Chinese growth numbers is now bottoming out.

"Domestically, Australia’s Reserve Bank cut the official interest rate to an all-time low of 1.75% in May in a bid to boost the sluggish economy. While we did see better than expected GDP growth over the March quarter, a further rate cut remains a real possibility.

"The lower return / higher volatility environment we're currently experiencing is likely to continue for some time – and 'Brexit' has only added to the list of concerns that investors have to factor in. If anything, the outlook for markets is even more uncertain now than it was this time last year. Super funds will find it hard to deliver on their long-term return objectives, and members will need to remain patient in the face of what may be disappointing returns."