Super Funds Take A Breather After Heady End To 2016

After a strong finish to 2016, super funds were relatively flat in January with the median growth fund (61 to 80% growth assets) down 0.1%. Nevertheless, the return over the seven months of the financial year to date remains healthy at 5.6%.

Listed shares are the main drivers of growth fund returns, and the performance of those markets was mixed in January. Australian shares retreated 0.8% and, while international shares were up 1.3% in hedged terms, the appreciation of the Australian dollar (up from US$0.72 to US$0.76 over the month) turned this into a loss of 2.4% in unhedged terms. Listed property was also in negative territory, with Australian and global REITs down 4.7% and 0.5%, respectively.

Chant West director, Warren Chant says: "The flat result in January doesn't come as a great surprise after the unexpectedly strong showing in 2016. The median growth fund return of 7.5% for 2016 was nearly 6% above inflation. That's well above the typical long-term objective of inflation plus 3.5% and much better than what most asset managers expected, given that we’re in a lower return / lower growth environment and most asset sectors are fully or close to fully valued.

"US share markets continued to rise in January amid optimism over President Trump's plans for tax cuts and higher infrastructure spending.  However, there remains much political and policy uncertainty. US growth figures released late in the month were lower than expected. The rate at which the US Federal Reserve raises interest rates will be one the key things to watch in 2017.

"In Europe, economic data was generally upbeat but there is growing nervousness around political developments in the region. 2017 will be a busy electoral year in the Eurozone with Germany, the Netherlands and France all holding elections this year. And of course, the uncertainty around the implications of last year's shock Brexit vote remains.

"Closer to home, there were indications that China's economic growth is stabilising. However, Trump's protectionist policies, if enacted, have the potential to set off a trade war that could be damaging. Back in Australia, the RBA kept interest rates on hold earlier this month citing an improvement in the global economy and a pick-up in business and consumer confidence. However, a further rate cut this year remains a live possibility as GDP growth remains constrained."

Table 1 compares the median performance for each fund category in Chant West's Multi-Manager Survey, ranging from All Growth to Conservative. Over one, three, five and seven years, all risk categories have met their typical long-term return objectives, which range from CPI + 2% for Conservative funds to CPI + 5% for All Growth. However, the GFC continues to weigh down the ten year returns. Over ten years the higher risk categories failed to achieve their objectives, but Balanced and Conservative did. Over 15 years, only the All Growth category fell short of its objective having been hardest hit during the GFC. 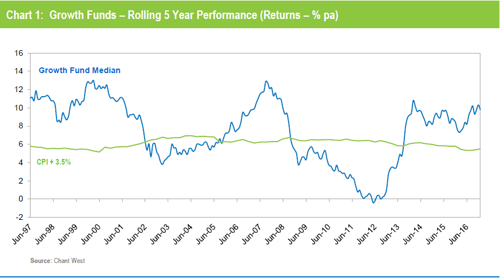 Note: The CPI figure for January 2017 is an estimate.

Chart 2 compares the performance of the lower risk Conservative category (21 to 40% growth assets) median with its typical objective of CPI plus 2% per annum over rolling three year periods. It shows that Conservative funds have also exceeded their objective in recent years. 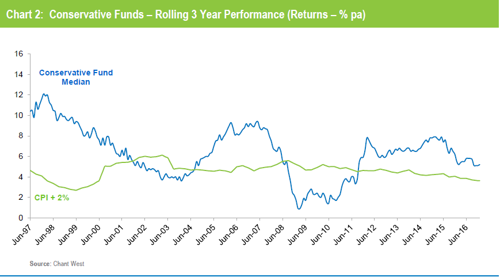 Note: The CPI figure for January 2017 is an estimate.

Industry funds edged out retail funds in January returning -0.1% versus -0.3%. Industry funds also continue to hold the advantage over the longer term, having returned 5.5% per annum against 4.5% for retail funds over the ten years to January 2017, as shown in Table 2.